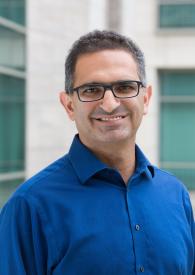 The Ashrafi lab investigates the intersection of metabolism, learning and memory, and aging.  Most of the studies employ C. elegans as an experimental system. A wide range of approaches including molecular genetics, genomics, biochemistry, pharmacology, imaging, and behavioral analyses are utilized. Additional areas of investigation include deciphering neuroendocrine determinants of fat content, mechanisms by which environmentally pervasive pesticides, pollutants, and chemicals act as obesogens, and using C. elegans to study the counterparts of human obesity genes. Collaborative efforts include extending the C. elegans findings into murine models and using cutting-edge label-free methods for imaging lipids and other metabolites in intact animals.

Metabolism and metabolites play fundamental roles in virtually every facet of biological regulation. Defects in metabolism are intertwined with numerous pathologies including diabetes, cardiovascular disease, cancer, and neurodegeneration. As metabolic regulation at the organismal level is the outcome of behavioral, physiological, and cellular processes, our aim is to understand this regulation as an integrated process. Our laboratory has helped pioneer the use of C. elegans as a simplified and genetically tractable platform for identifying the molecular components and disentangling the logic of complex homeostatic networks that underlie energy balance. A more recent area of investigation has been deciphering the mechanisms through which metabolism affects learning and memory. The broad areas of investigation in the lab are listed below:

1. Kynurenic acid as a mechanism that links metabolic state to neural plasticity including learning and memory: As in mammals, C. elegans exhibit food-modulated behavioral plasticity. For instance, following fasting, C. elegans temporary over-eat once they are re-exposed to food. We recently discovered that a specific metabolite of the tryptophan degradation pathway, known as kynurenic acid, serves as an indicator of energy status to link metabolism to neural functions. Our preliminary findings indicate that this mechanism also functions in mice. More recently, we demonstrated that reductions in kynurenic acid underlie the beneficial effects of caloric restriction on enhanced learning and memory. Importantly, we have found that the beneficial effects of kynurenic acid on learning capacity are distinct from the effects of caloric restriction on lifespan. As such, we have discovered a highly specific mechanism by which caloric restriction elicits beneficial neural effects. We have also found that one reason that aging is associated with declines in learning and memory is due to aberrant accumulation of kynurenic acid. These discoveries are exciting given the well-established links between the kynurenine pathway and a number of human neurodegenerative and psychiatric disorder. Finally, we have identified a novel hormonal mechanism that links developmental stage and reproductive capacity to neural mechanisms of learning and memory.

2. Analyses of neural fat and feeding regulatory circuits: As in other organisms, a number of neuroendocrine signaling pathways such as serotonin signaling centrally coordinate fat and feeding pathways in C. elegans.  We have delineated the cellular and molecular mediators of some of these signaling cascades. We have shown that the nervous system regulates fat independent of its regulation of feeding behavior. This is possible since neuroendocrine signals can determine whether ingested nutrients should be directed to fat storage or utilization pathways. In turn, we are investigating metabolic signals that are generated in peripheral tissue and inform the nervous system of the organism’s metabolic state.

3. Analysis of C. elegans counterparts of human obesity genes. We have used C. elegans to analyze evolutionarily conserved mechanisms implicated in metabolism and aging. These include the mechanistic Target of Rapamycin (mTOR) and AMP-activated kinase (AMPK). We have also leveraged the experimental advantages of C. elegans to investigate a set of genes, mutations in whose human counterparts underlie a complex syndrome associated with obesity known as the Bardet-Biedl syndrome. As the complex of BBS proteins is required for proper formation and functioning of cilia, cellular organelles enriched in signaling molecules, it is widely assumed that obesity of bbs mutants must be due to inappropriate localization of receptors with roles in body weight regulation. By analyzing the C. elegans bbs mutants, we discovered that while these mutants indeed have ciliary defects, their excess fat is, however, due to excess secretion of dense-core vesicles rather than inappropriate signal receptor by cilia-localized receptors. This notion challenges the prevailing paradigm in the field.

4. The role of environmentally pervasive pollutants in the rise of obesity: Just as certain chemicals pervasive in our environment act as endocrine disruptors with adverse effects on reproduction or development, epidemiological studies and animal experiments show a link between exposure to environmental chemicals and obesity. The idea of environmental ‘obesogens’ is not novel, but a formidable challenge has been identifying the molecular mechanisms of their actions vis-à-vis obesity. This lack of molecular clarity has marginalized consideration of these agents as key drivers of obesity. To address this issue, we are using C. elegans both to screen for environmentally pervasive compounds that can act as fat increasing drugs and use worms to decipher their mechanisms of action.

5. Identification and analyses of molecular mechanisms of action of fat altering drugs. We have used C. elegans to screen through compound libraries of the Small Molecule Discovery Center at UCSF to identify those that alter fat content. In collaborative efforts, we are investigating mechanisms of actions of these compounds in the context of whole animals by combining in silico predictions with in vitro and in vivo validation of these predictions on C. elegans and mammalian pathways.

Kaveh Ashrafi earned his undergraduate degree in Biochemistry from Virginia Tech before pursuing a PhD in Molecular Cell Biology and Biochemistry at Washington University School of Medicine. He completed subsequent postdoctoral research at Harvard Medical School and The Massachusetts General Hospital before joining the UCSF department of Physiology as Assistant Professor.

Dr. Ashrafi holds a number of awards including a Jack D. and DeLoris Lange Endowed Chair in Systems Physiology, two Haile T. Debas Academy of Educators Excellence in Teaching Awards from UCSF, and a Kaiser Award for Excellence in Teaching. In addition to being an Associate Professor for the Department of Physiology, he is faculty in the PIBS Graduate Program as well as the BMS Graduate Program and affiliated with the Cardiovascular Research Institute.

When Eyes Move During REM Sleep, They’re Gazing at Things in Dreams
September 01, 2022

Nobel Laureate David Julius: Behind the Scenes and Celebrations
October 08, 2021