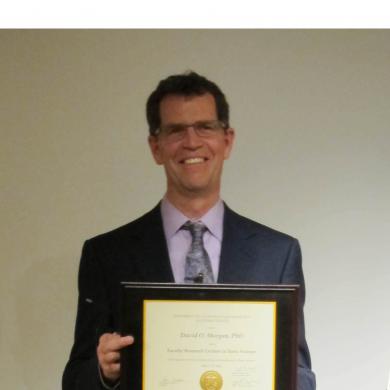 The Academic Senate is pleased to announce the selection of David O. Morgan, PhD, as recipient of the 59th Annual Faculty Research Lectureship – Basic Science for his groundbreaking research on cell division. The lecture, titled “Chasing Ghosts in the Cell Cycle Machine”, will take place on Thursday, March 17, 2016, at 3:30 p.m. in Byers Auditorium, Mission Bay Campus. The event will be simulcast and a reception will follow.

A world leader in understanding the mechanisms that control the cell division cycle, Dr. Morgan has exploited powerful biochemical and genetic tools to explore the regulatory system that guides the eukaryotic cell through the stages of cell division. This work has revealed detailed properties of key regulatory proteins, including the cyclin-dependent protein kinases and an ubiquitin ligase known as the Anaphase-Promoting Complex. His signature contributions include the discovery of numerous regulators and targets of these enzymes. His discoveries have revealed the intricacies of the circuits that control cell reproduction, and they represent foundational contributions to a central problem in biology.

Dr. Morgan’s textbook, The Cell Cycle: Principles of Control, has emerged as the authoritative work on the topic. He is also an author of the influential general cell biology text, Molecular Biology of the Cell.

One of UCSF’s most highly regarded and decorated teachers, Dr. Morgan gives lectures on cardiovascular physiology that have been recognized with the UCSF Medical School Teaching Award for Outstanding Lecture Series six times, as well as the Kaiser Award for Excellence in Teaching. He also makes major contributions to graduate teaching, and received the Outstanding Faculty Mentorship Award from the UCSF Graduate Students Association. For his scientific contributions, Dr. Morgan was recently elected as a Fellow of the Royal Society.

Dr. Morgan is Vice Chair and a Professor in the Department of Physiology and a Professor in the Department of Biochemistry and Biophysics. He is the Director of the UCSF Tetrad Graduate Program, one of the nation’s premier programs in cell biology, genetics, and biochemistry. He received his PhD from the University of California, San Francisco, where he also completed postdoctoral training. He joined the UCSF faculty in 1989.

The 59th Annual Faculty Research Lecture – Basic Science will be held in Byers Auditorium, Mission Bay Campus, on Thursday, March 17, 2016, at 3:30 p.m., and will be available to stream via simulcast. Refreshments will be provided. The lecture is open to the campus community and the general public.

Since 1957, this award has been bestowed on an individual member of the UCSF faculty who has made a distinguished record in basic science. Nominations are made by UCSF faculty, who consider scientific research contributions of their colleagues and submit nominations for this prestigious award to the Academic Senate Committee on Research. Each year, the Committee on Research selects the recipient of this award.

A list of the past recipients of the award can be viewed here.

UCSF in The News: Huff Post article There's So Much We Still Don't Know about Pain..Featuring Dr. David Julius, Professor and Chair of Physiology
February 27, 2020