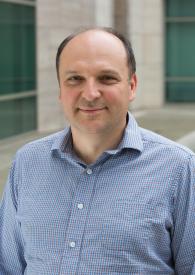 The Kirichok Lab strives to push the boundaries of cellular and organellar electrophysiology. They developed methods for application of the patch-clamp technique to mitochondria and sperm cells, which has allowed us to characterize several new ion channels and transporters. Currently, with the help of mitochondrial patch-clamp, they are venturing into unexplored areas of bioenergetics to fill significant gaps in our understanding of energy production, basal metabolism, thermogenesis, and aging.

Mitochondria are ubiquitous intracellular organelles responsible for diverse cellular processes including ATP production, intracellular Ca2+ signaling, aging, and programmed cell death. Given the paramount significance of mitochondria in cell physiology, it is not surprising that they have also emerged as key contributors to many pathological conditions, including diabetes, obesity and neurodegenerative diseases. However, development of effective treatment for these disorders has been hampered by our insufficient understanding of the molecular workings of the mitochondrion and how they can contribute to disease.

Recently, this long-standing technical problem was overcome, by demonstrating that the patch-clamp technique can be reproducibly applied to the IMM in its entirety. In the lab, this powerful biophysical method is combined with genetics and molecular biology for the comprehensive study of the mitochondrial ion channels and mechanisms of their regulation. Results from this work will uncover the fundamental physiological mechanisms that control mitochondrial functions.

Electrophysiological and molecular characterization of the mitochondrial Ca2+ uniporter (MCU) and mechanisms of its regulation.
The MCU is a highly selective Ca2+ channel of the inner mitochondrial membrane responsible for mitochondrial Ca2+ accumulation during intracellular Ca2+ signaling. It is important for regulating the rate of mitochondrial ATP production, shaping intracellular Ca2+ signals, and initiating both necrotic and apoptotic cell death. The MCU also has been implicated in regulation of ROS production by mitochondria and thus likely plays an important role in aging and neurodegenerative diseases. Unfortunately molecular identity of this important channel and its mechanisms of regulation remain unknown. We hope to solve this problem and learn more about physiological and pathophysiological roles of the MCU.

In addition to the MCU, the inner mitochondrial membrane contains proton, potassium and chloride channels as well as a large non-selective pore called the permeability transition pore (PTP). These ion channels, mechanisms of their regulation and their physiological functions remain largely unexplored. We plan to establish the full complement of ion channels located in IMM and prepare basis for their molecular characterization. These results will help us better understand physiological and pathophysiological roles of electrical signaling in mitochondria.

Yuriy Kirichok earned his undergraduate degree from Moscow Institute of Physics and Technology before pursuing a PhD in Biophysics at Bogomoletz Institute of Physiology in Kiev, Ukraine. He completed subsequent postdoctoral research at Harvard Medical School before joining the Physiology Department at UCSF.